Vision Of The Glory Of The Latter House 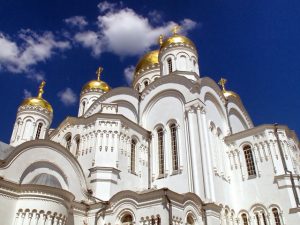 I saw heaven open and a white dove descending with a terrific speed. There was thick white smoke any direction it went and instantly, this metamorphosed into a white cloud. I heard a loud voice out of the white cloud, “this is the glory of the latter house. I will fill the earth with the glory of my knowledge as water covers the sea”.

This vision shows that the church is on the verge of another revival of HIS glory. The Holy Spirit will descend afresh upon the church which is the house of God’s glory with the revival of glory, holiness and power. In this revival, God shall fill the whole earth with the knowledge of his glory, holiness and power. The glory of the latter house is the earnest expectation of the Church and the only hope of this generation. This is because it is the divine visitation of God in this end-time that will culminate in spiritual awakening and manifestation of the sons of God who will bring deliverance to the world.

In the days of this new spiritual awakening, nations will come under the mighty influence of God’s Spirit and this will result in irresistible conviction of sin, conversion of sinners and restoration of backsliders.

According to God’s prophetic calendar, we are almost in the season of the latter rain. The clouds are gathering. There are sounds of abundance of rain. The wind that brings rain is blowing already. Get ready, for we shall have showers any moment from now!

The Characteristics of the Glory of the Latter House

The glory of the latter house speaks of the nature and characteristics of all-encompassing move of God among men before the end of all things. The anticipated manifestations of God’s glory will surpass any revival or move of God that has been previously witnessed on earth. This is because the coming revival or move of God shall cover the whole earth as water covers the sea (Habak. 2:14; Number 14:21; Psalm 22:27; Isaiah 11:9).

The former and the latter rain

The coming torrential outpouring of God’s latter rain revival will result in supernatural flood of God’s power that will submerge cities, communities and even nations. All the mighty things that happened in the previous revivals can only be classified as the glory of the former house. This is because the full glory is yet to come. The main glory will soon come. It will come as soon as the latter house is in place. The glory of the former house will soon be replaced with the glory of the latter house, for “when that which is perfect is come, that which is in-part is done away” (1Cor. 13:10).

Note that this message is to be continued in our next month’s post. Please watch out!